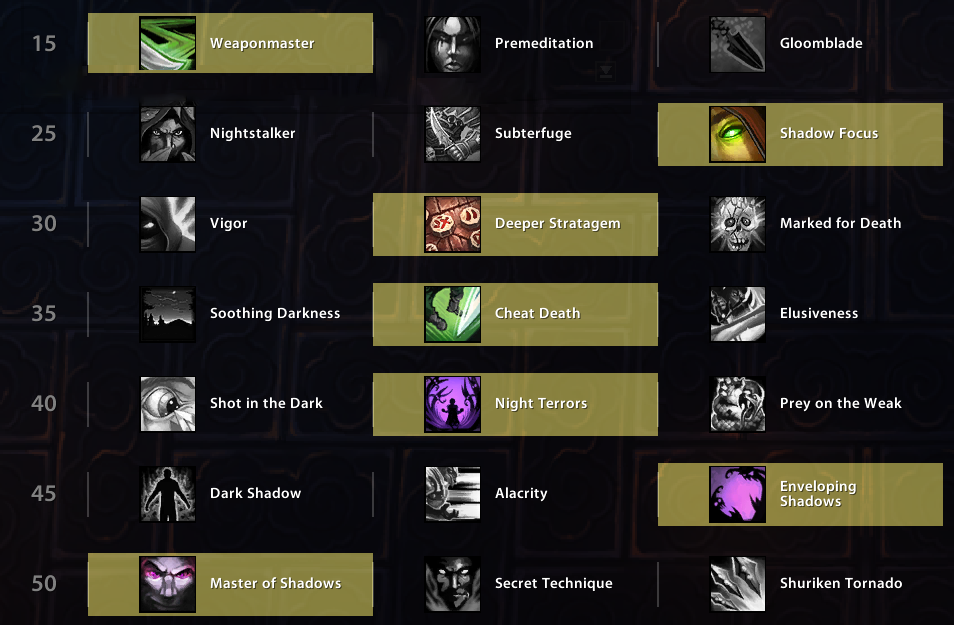 Mythic+ / Cleave:
Note: Premeditation and WM are interchangeable, this means both are valid options.

The gameplay revolves around stacking damage amplifiers. The main cooldown is Shadow Dance. It allows you to replace the weak builder Backstab with Shadow Strike. In practice this means you will try to use Symbols of Death on cooldown and align Shadow Dance to it.
Combo point generators follow the following order:

Shadowstrike during Shadow Dance, Stealth or Vanish.
Backstab if you are outside of Shadow Dance.
Use Shuriken Storm instead of Backstab if you have 2 or more targets.
Use Shuriken Storm instead of Shadowstrike if you have 3 or more targets. (4 if the Premeditation buff up, if you have the tier set or if you use the Akaaris Soul Fragment Legendary Power in combination with higher Deeper Dagger ranks)
Note: Use Shadowstrike to apply Find Weakness to additional targets in 2 or 3 target cleave situations.

Use a finishing move if you hit 5(4 if talented in Vigor, Marked for Death or on exactly 4 targets) or more Combo Points. Finishing moves are split into two categories, Maintenance and Damage. You usually want to keep your maintenance buffs/dots up 100% of the time while shifting the use of your maintenance spells outside of Symbols of Death..
This means you will use your finishing moves under the following conditions:

Legendary Items:
The best choice for single legendary is the covenant one on Venthyr and Kyrian. Night Fae and Necrolord use Akaaris as single legendary. The choice does change from Akaaris to Finality in mythic plus.

You will always use Akaaris on single target and Finality else as your primary legendary once double legendary unlocks.

FAQ:
Can i pick Premeditation instead of Weaponmaster on Single Target?
Weaponmaster is usually the better choice so its advised to use it.

How does Pandemic work?
A new applied spell can take up to 30% of an existing spell and extends the new applied spell with this duration. Keep in mind that those 30% are calculated from the new spell you cast.

About:
I am Fuu(fuu#7750), Rogue Theorycrafter since Legion. If you got additional questions, found mistakes or want to have something covered in the guide send me a DM on discord. You can do this by clicking on this link. I also maintain the Wowhead Guide for Subtlety Rogue that you can check out if you want a more in detail option.

Rogues in the Battle for Azeroth Pre-Patch: What’s Changing

If you aren't already a member of our Discord, come on over and join the conversation:

Make sure that you type !member in #bot-spam for permission to respond.

Streamers and people who like to watch streamers: check out the #rogue-streamers channel on Ravenholdt Discord:

We are eternally grateful for our Patreons as they help fuel the new projects that you see popping up on the discord server, the podcast, and this website.

Without our Defias Brotherhood supporters, this website would be a fragment of what it is now. So we'd like to offer a special thanks to:


If you're interested in joining the Defias Brotherhood click the link below and earn our eternal love for your support!

Merch: You Know You Want It

Fans of Knives is back! @MarcelianOnline
@Wowhead
@ZeraTheRedRogue
...and more!

Come by our discord and check out our awesome custom emojis by @thordram They are freakin' adorbs!

Our Discord outage begins momentarily. Please do what you can, be it a small or large thing (including donating to the organizations #ActiBlizzWalkout identified, if you have the means) to support women in the gaming industry and act against bullying, assault, and discrimination.

In solidarity with the #ActiBlizzWalkout 💙, the Ravenholdt Discord channels will go silent from 10am-2pm PT on July 28, 2021.

Fans of Knives: Have you heard, there's about to be a new xpac...