Well now. This was somewhat unexpected.
Back in mid-December, confusion and frustration greeted a relatively minor, niche-oriented set of rogue buffs. By comparison, reaction to the newest set of across-the-board rogue buffs, unveiled as Patch 6.0.3 hotfixes earlier tonight, is already considerably more positive.
The text of the official hotfix notes reads as follows for each spec:
The estimated single-target raid DPS increases for each spec, largely according to napkin math by Fierydemise, are:
The Assassination buff is unusual in that it appears to simply be a blanket damage increase. Usually they are tied to a specific ability, as they are with Combat and Subtlety. (The hotfix note for Combat originally read “Combat Rogues now have 7% more Attack Power,” but was later changed to be more specific; changing Vitality to grant 50% additional attack power instead of 40% is a 7.1% increase to attack power.)
[UPDATE 1/7: The nature of the Assassination buff was clarified the next day.]
The Subtlety buff is technically 4.2% if full, 100% uptime of Sanguinary Vein can be maintained on the target, but actual 100% uptime is almost impossible; 95% to 99% is more typical of a decently skilled Subtlety rogue.
Although these changes initially had a “Currently in testing” caveat next to them when the patch notes first went live, Community Manager Rygarius confirmed later in the evening, from his personal Twitter account, that they were live.
If you’re wondering to yourself, “Just how large a buff is 4% to 6%, really?” I want to show one quick example: 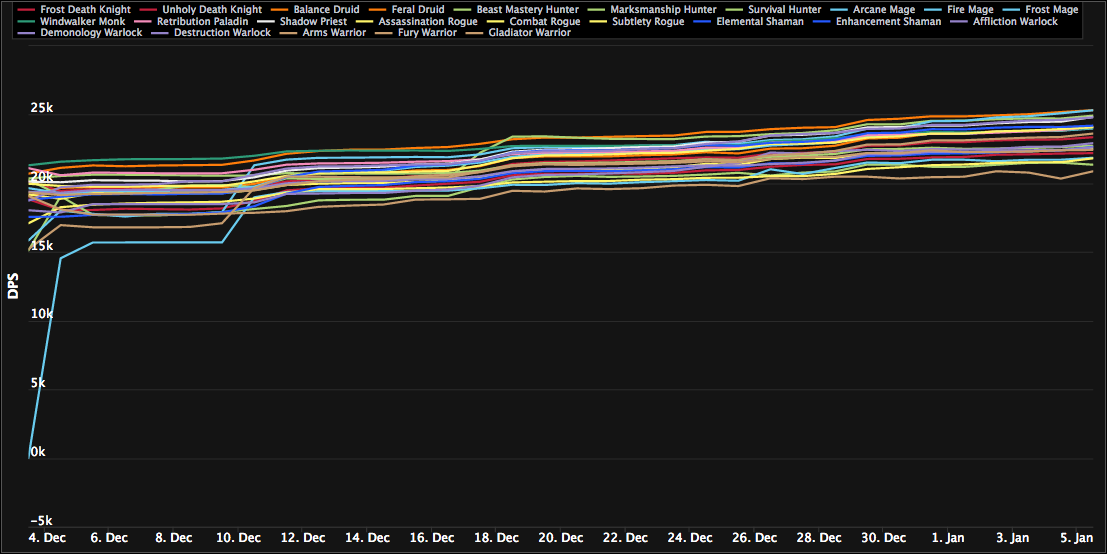 That is Warcraft Logs’ DPS chart over time for the average (50th percentile) player on heroic-difficulty Butcher within the Highmaul raid (using one-week averages). The top spec overall as of right now is Feral druids, with 25,329 DPS on average. The top rogue spec is Subtlety, with 24,086 DPS — a little less than 5% behind Ferals. All other things being equal, if the Subtlety buff had gone into effect last week, average Subtlety DPS would now be 25,089, virtually identical to Ferals and #3 overall (alongside Arcane mages).
That’s just one example, and it’s not meant to suggest that rogues will suddenly be topping every meter on every raid fight. It’s just meant to show how significant a 4% to 6% buff can be in today’s class-balance climate, where most classes’ best specs on each raid fight are generally within around 5% of each other. This is likely to make at least one rogue spec, if not more, highly competitive on nearly every fight in the current tier.
Don’t be surprised if your spell tooltips don’t yet reflect these buffs (e.g., if the Sanguinary Vein tooltip continues to say that it buffs damage by 20% instead of the new 25%). Tooltip text is usually stored on a player’s computer, so they typically need to be updated whenever it’s time to download a new patch (for instance, Patch 6.1, which is unlikely to launch for at least another month).
Wanna talk about this more? Join me in our dedicated discussion thread on this post.
[EDITOR’S NOTE 1/7: We later posted clarifications on the Assassination buff, as well as additional analysis on what these buffs likely mean for each spec in end-game raiding.]