Week one of Highmaul, the firstest-ever raid in the Draenor-iest expansion we’ve ever had, is complete. How have rogues stacked up against other classes in the not-as-important-as-we-often-make-it-seem DPS category — and how have each of the three rogue specs stacked up against each other?
The early verdict is in: Rogues are mostly fine. On some fights, we’re great. On some, we’re subpar. But for the most part, across the seven boss fights that make up Highmaul, rogues finished out the first week of normal and heroic raiding with slightly above-average DPS performance compared to all other DPS classes and specs.
I’ll bang out a list of highlights later in this post. But first…
Let Me Bore You With Some Caveats 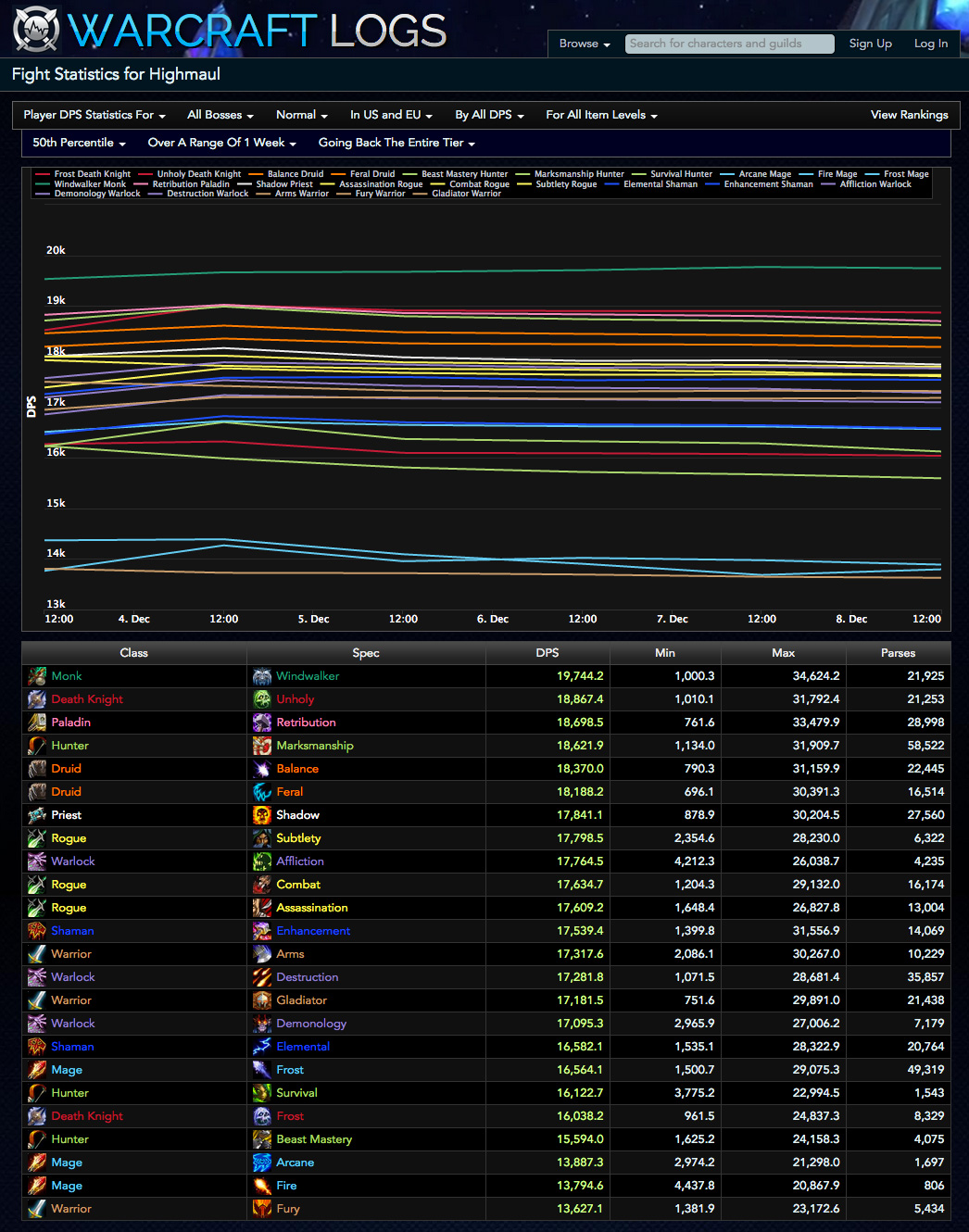 I’ve spent a pretty depressing amount of time this week looking through the statistics area on Warcraft Logs, which is what formed the basis for virtually all of the conclusions in this bloggy. I’ll provide nerdy details about what I looked at further down in this post — it’ll include links to source materials in case you want to double-check my observations or do your own separate analyses, since I’ll only talk about a fraction of the conclusions a person can probably reach by analyzing this stuff.
For those of you who are unfamiliar with Warcraft Logs, it’s a relatively new resource that allows you to upload and analyze combat logs from whatever it is you’re doing in the game (though it’s usually used for raiding). It’s a lot like World of Logs in this respect. Also like WoL, Warcraft Logs — which I really want to call Warclogs but will instead refer to as WCL — allows people to browse through other folks’ logs, and to see which players have the “best” parses in various raid encounters.
But WCL also goes a bit beyond WoL in several ways. One of them is the statistics area I referred to, which takes all of the data from every public raid log uploaded to their server, mushes it together, and lets you analyze it in a bunch of different ways I won’t get into here, because there’s a lot of them. If you remember Raidbots from previous expansions, it’s a lot like that, only more customizable.
WCL is still growing as a resource, and the statistics it provides will only be as reliable as the data that’s put into it. The more raiders who save their logs and upload them to WCL, the more complete WCL’s data collection will be, the more reliable its statistics will become. It’s gotten enough traction that it’s a reputable source of information, but it can — and, if more people keep using it, will — be better. That’s the first caveat.
Still, imperfect or no, it’s arguably the best source of aggregated information on class/spec DPS that we players have easy access to. So it’s where I turned to look at how rogue DPS fared in boss fights during in the first week of Highmaul.
I like looking at Week 1 stats for raids. In the first week a raid opens, the people who are raiding tend to be very highly motivated — if they weren’t, they wouldn’t have leveled to 100 and prepped their toons so they’d be ready to bust them up some ogres the same week the raid opened. This also tends to be a group of folks who wants to kill bosses, not make themselves look good. So Week 1 is probably the week in which you’re least likely to see people trying to take advantage of fight mechanics just to pad their DPS meters.
However, I think it’s also debatable just how reflective of the “typical raider” these Week 1 pioneers are. For one thing, top raiding guilds usually don’t upload their logs, because they don’t want to give away their strategies to competing guilds. For another, I suspect these players are generally better at playing their class than most of us are; their motivation to raid as soon as it opens often translates to motivation to master their characters and properly prepare for boss fights. So we need to be careful about treating these statistics like they’re a perfect reflection of reality; they’re not.
Also, the first week of raiding is the one in which people are the most undergeared. That risks skewing *everything*. Is crappy gear offset by higher average skill level of the players? Who knows. But if, for instance, rogues end up scaling a lot better with gear than other classes do, then these early numbers will underestimate their strength. If the opposite is true… well, then, the opposite would be true. We’ll have to wait and see.
“Wait and see” also applies to tuning passes that will inevitably occur — and heck, already have occurred — for some classes and boss fights as WoW’s designers get a better sense for who is looking a little too good and who isn’t looking nearly good enough. That limits the staying power of a lot of these findings; for instance, windwalker monks may look right now like they leave rogues in the dust, but once class changes are applied over the coming days and weeks, that may suddenly no longer be the case.
So Here’s What I Did
Still, like I said, WCL’s stats are probably the best tool we’ve got to at least get a sense for where we stand on the DPS mountain at the moment. So I looked at our overall numbers, and I looked at how we did on each fight. I looked at normal and heroic modes. And I looked at various points along our  spectrum of crappiness — starting at the 50th percentile, a.k.a. the quintessential “average” rogue, and working up to the 99th percentile, a.k.a. the cream of the crop.
I took a lot of screenshots (beware the long load time; it’s a 79MB document) for posterity. I also copied and pasted some of the DPS numbers into a spreadsheet so I could see how each class and spec “ranks” on DPS compared to each other.
And Here’s What I Found
I’m going to use the 50th percentile normal-mode numbers for these conclusions, because I think they’re most reflective of what the average rogue player might expect to experience. (That said, there’s a pretty high level of similarity between 50th and 95th percentile data, as well as between normal and heroic data.)
Those are just some highlights I thought were interesting. As I said, please feel free to dive into the screenshots and spreadsheet yourself — or, better yet, do your own swimming around in Warcraft Logs’ statistics — and let’s talk about whatever you find!
—