Blizzard Watch has a nice summary:

And Wowhead has tooltips as well as the blue tweets that followed the preview posting:

Fierydemise has a write up on his concerns following the preview:

Blizzard Watch has published a new Encrypted Text in which Scott Helfand takes a deeper look at what is coming for us:

Aneuryzm of Infexious Gaming has a couple of videos looking at and reacting to what was announced:

Anne Stickney of Blizzard Watch logged her opinion in The Queue:

Keydar of Dark Legacy Comics reflects on what spec to choose:

And many of you Tweeted your first reactions. We grabbed a sampling:

And in other news…

Anne Stickney talked about her feelings on the Assassination artifact weapon in a Breakfast Topic:

Sativ is running a transmog competition for rogues only:

Doing a Transmog competition for ROGUES ONLY – Please send your Transmogs @Sativ_BH on Twitter. Or Direct Message me on Twitch

Keep in mind. ONE Entry per rogue. So make sure you look GOOD as HELL boyz.

Perfect Example of an Entry 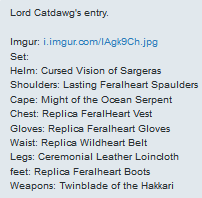 And while you are busy entering his competition, why not shoot a copy of your transmog to us for possible future inclusion on the site?  Send the following to fans@ravenholdt.net:

(Please note that we may not be able to feature every submission and those that are selected may not be posted immediately.)