A few days ago Ion “Watcher” Hazzikostas (@WatcherDev) mentioned in an interview with Blizzplanet that the rogue class hall is intended to be in the Dalaran Sewers Underground.  Since then hordes of rogues have allied together under the hashtag #RavenholdtOrRiot in an attempt to bring our class hall to Ravenholdt.  The four of us who run Ravenholdt.net have each written a little blurb about our thoughts on the movement and the placement of our new home.  Spoiler:  We all would prefer Ravenholdt to the Dalaran underground.
From Haileaus (@Haileaus) 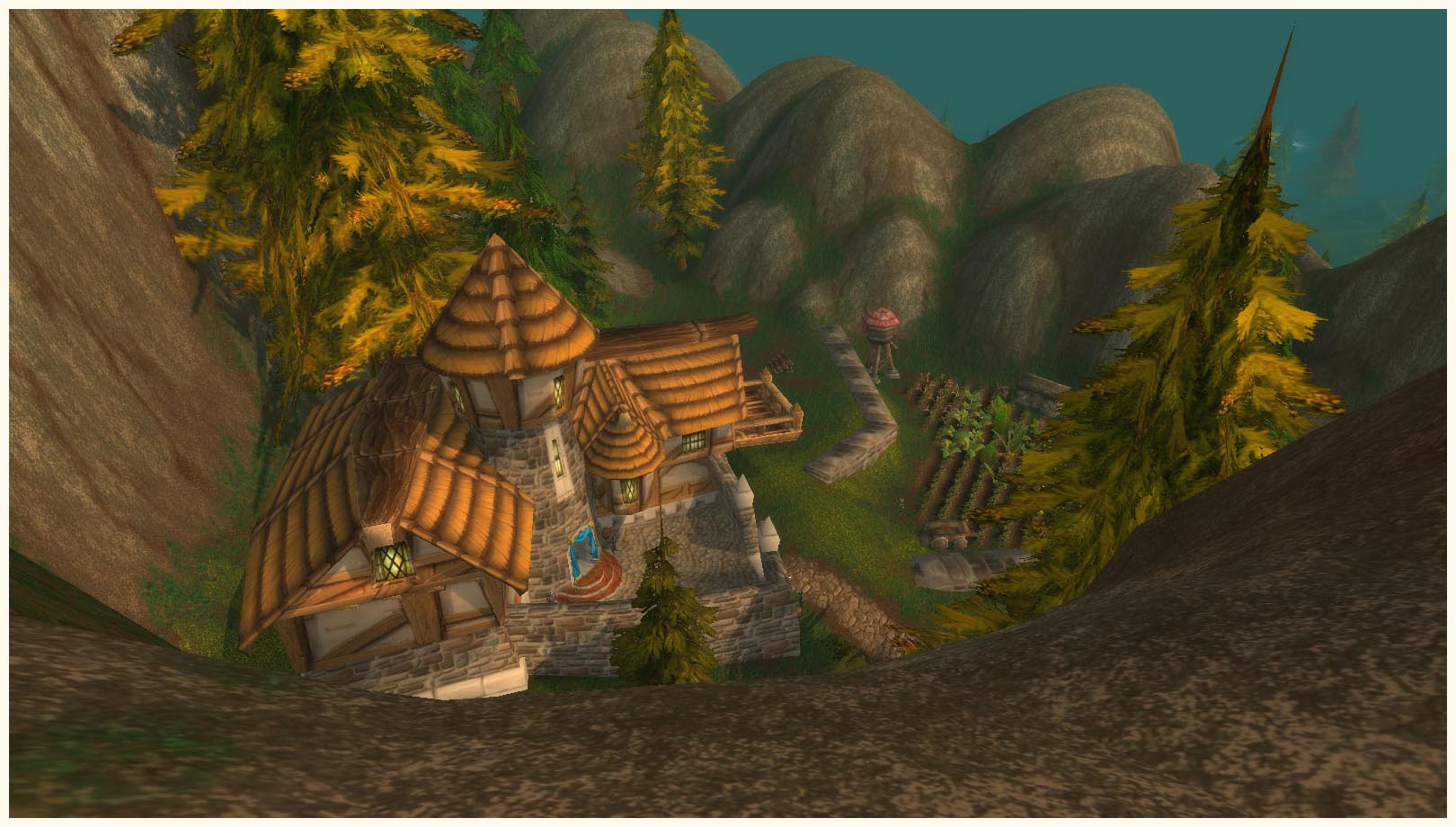 The reason so many rogues want Ravenholdt is because when we were first introduced to it we fell in love with its lore.  The hidden mansion in he hills, riddled with booby-traps, that we were one of the few people to know of its existence, let alone actually visit and return.  The place where rogues were trained in the art of lockpicking and where there was an ongoing battle The Syndicate, aka our competition.
In and outside World of Warcraft rogues have a reputation of being lowly, selfish, and unworthy.  It is the nature of the stealth-based class for others to treat us as lesser, claiming our success comes from our ability to cheap-shot unsuspecting prey.  The fact is, rogues are consistently the underdog, and in a game like Warcraft where you have paladins anointed by the Light and warlocks who sell their soul for incredible power, it is hard to imagine a rogue as legitimately being on that level.  All this means rogues as a group are often a bit sensitive.  We know, because Ravenholdt taught us this, that we can be so much greater than what those other classes think of us.  We know that we can alter the events of Azeroth like very few others are capable of because we have seen Wrathion emerge from our hallowed mansion to become one of the most prominent figures in Azeroth.
As we fight alongside the greatest mages, warriors, druids and deathknights of our time there is always a question in the back of our heads:  “Are we truly among these great heroes, or at the end of the day are we just simple cutthroats and thieves pretending to be more so we can play with the big kids?”  This is why the Dalaran underground hurt so much.  It answered this question for us, and the answer was that at the end of the day, when we are tired and want to be among our own, we won’t be going to great halls or places of renown.  We will go under the City of Mages, to where our great deeds mean nothing.
It doesn’t matter how thematically appropriate the Dalaran Underground is.  It doesn’t matter if we are the leaders of this underground.  And as catchy as it is, it doesn’t (really) matter that the underground is in the sewers.  What 86% of rogues who filled out that strawpoll in favor or Ravenholdt want is to be in a place where rogues are recognized as worthy.  Worthy of respect, worthy of training, and worthy of having their own place, independent of any place or other class.  Ravenholdt is the only place that has deemed us worthy of all these things and more.  Compared to that, any underground – where it is usually considered an achievement to get out of – is just adding insult to our already injured pride.
From Rfeann (@SvelteKumquat)
Am I the only one who started hearing patriotic music in their head as they read Hail’s words? If I’d been down on playing my rogue before reading that, I’d be inspired to pick it up again now. 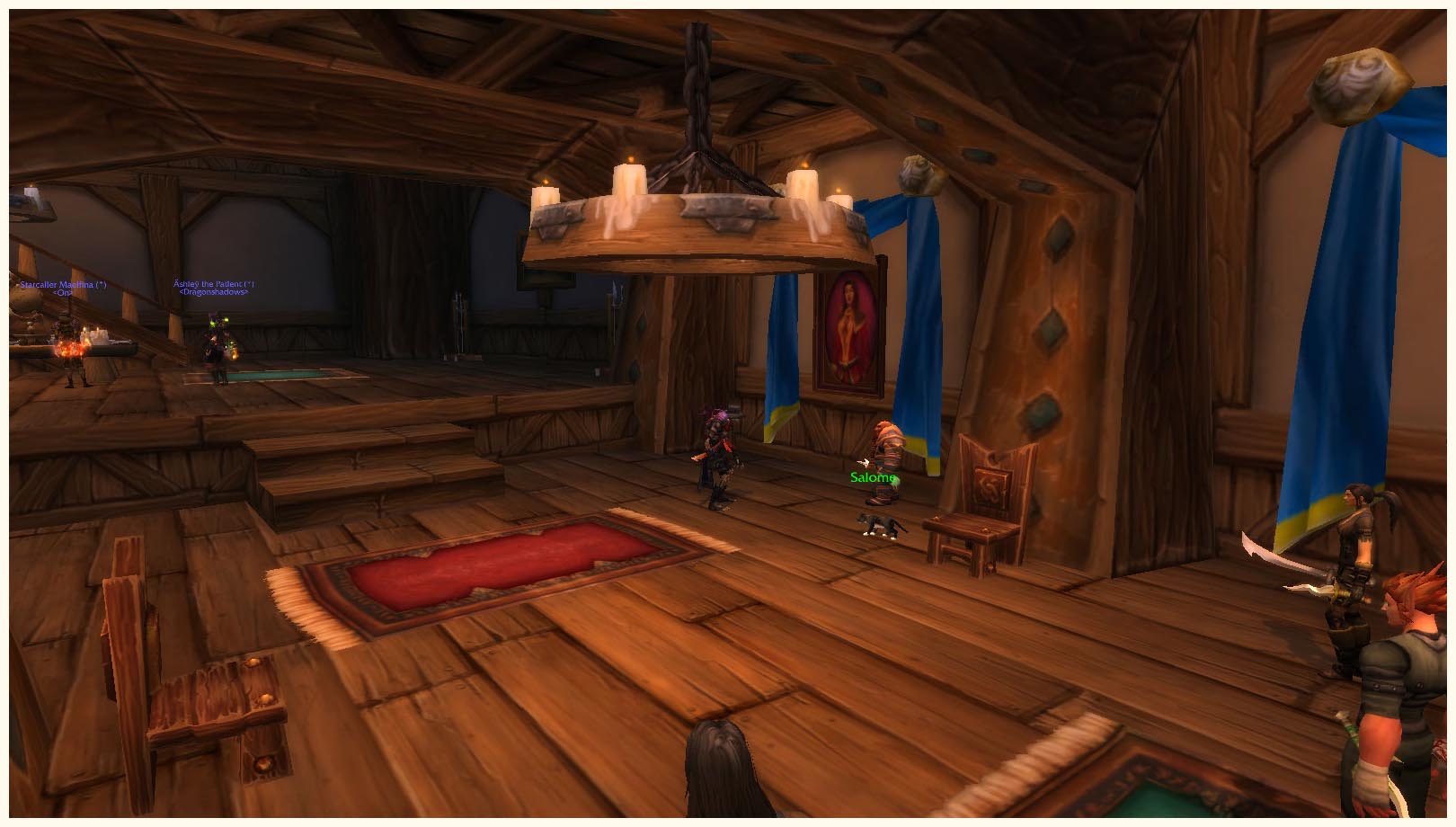 Infused within Hail’s points, I think, is a feeling of loss. We’ve talked a lot over the past two expansions about the degradation of spec identity, and devs have publicly let it be known that a more solid aesthetic differential between specs is a likely priority for the next expansion. And that’s fine — good, even. But I think aesthetic spec differential is less important than aesthetic class distinction, particularly in light of the upcoming birth of a new leather melee class.
Ravenholdt — the in-game location — hearkens back to an era when playing a rogue felt more distinct than it does now. When dungeons had lock-pickable chests, and raids had disarmable traps; when we had several class-specific quest chains closely tied to our class identity (and that were required to unlock core flavor abilities); when poison use felt like a more involved, engaging process.
I’m one of those players who really misses the feeling that rogues can do things nobody else can do in the game, and experience things in the game no other class can experience. (I very much wish rogues, and only rogues, had the ability to “see” those assassins that patrol the halls of Hellfire Citadel — and could even make them partly visible to their raid group.)  It’s the reason I keep coming back to the mantra that I never feel more like a rogue than when I’m questing out in the world; stealth and pickpocketing are all I feel like I’ve got that make my class feel the way it felt when I fell in love with it. And even pickpocketing has a low ceiling for me, given how quickly those many different trinkets fill up my bags and the frustrating inconsistency in which types of mobs have pockets.
So I want to reclaim some of that lost “special” feeling. Which is why the idea of Ravenholdt as a Class Order location resonates with me — and why the idea of the Dalaran Sewers as that location strikes such a discordant note.
From Fierydemise (@Fierydemise) 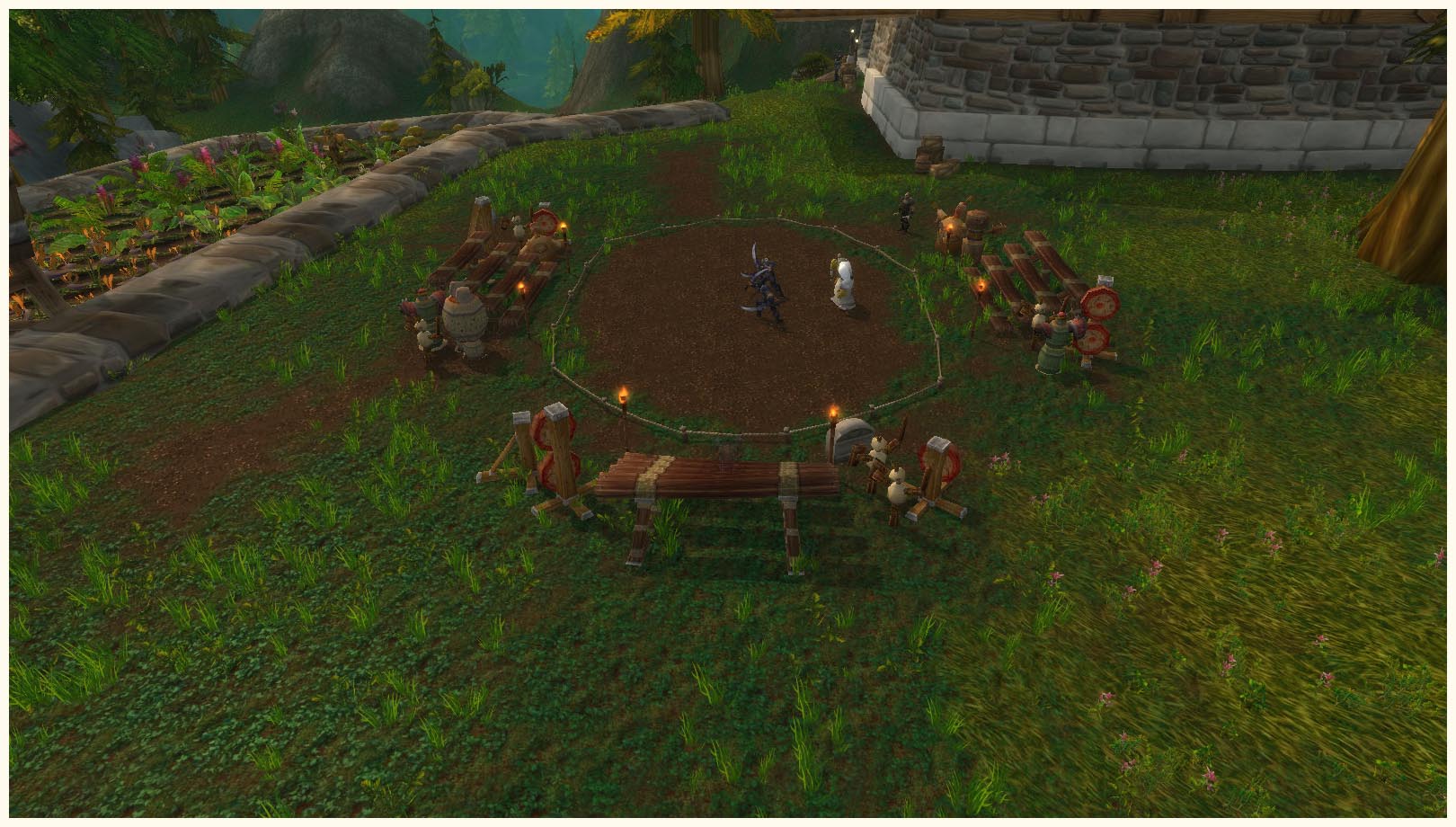 Watching the #RavenholdtOrRiot hashtag has been odd in many ways because its such a seemingly silly thing to riot over but after reading some of posts and tweets it makes sense. Anger about Ravenholdt doesn’t require any mechanic discussion or numbers, it’s pure emotional attachment. All that said there are a couple reasons from a developer perspective not to use Ravenholdt that are worth considering.

1) Ravenholdt is in the middle of no where. From a lore perspective this makes some sense but from a gameplay perspective it isn’t ideal. However that isn’t unique to Ravenholdt, a huge number of the plausible order locations including ones that Blizzard mentioned on Thursday are also not in a prime location. Moonglade, Peak of Serenity, The Maelstrom, none of these are anywhere near the Broken Isles. If Blizzard wants to use any of them as class order locations than it doesn’t seem like too much to ask for rogues to also get Ravenholdt. If Blizzard does decide to place all the class orders in close proximity to the Broken Isles for convenience it should be at least partially affiliated with Ravenholdt, perhaps “Ravenstead” or something. As the visceral reaction to Dalaran Sewers show many rogues have an emotional attachment to Ravenholdt and the class orders should respect that.

2) In the lore Ravenholdt was destroyed. I’d forgotten about this, and I think a lot of rogues have forgotten about this but at the end of the Fangs of the Father quest line the Red Dragonflight attacks Ravenholdt and does an unspecified amount of damage. We see a lot of dead guards and the building on fire but the exact fate of Lord Ravenholdt and the order has never been discussed. Of course lore contradictions are rarely a problem and here the destruction of Ravenholdt actually creates a very nice story. Free idea for Blizzard, after the legion invades some great rogue (perhaps Garona, perhaps some previously unknown rogue) decides to reestablish the order and asks the player to assist. This quest takes the player to the ruins of Ravenholdt and in the ruins they discover a legendary pair of assassin’s daggers. Tada! Now Ravenholdt is reestablished through in game actions and one rogue artifact weapon is handled. Blizzard has committed to class quests with this artifact system which gives them a chance to tell limited class specific stories, in this case reestablishing Ravenholdt.

Yes #RavenholdtOrRiot is probably a bit extreme but the reaction has shown just how important Ravenholdt is to many rogues. And yes, there are decent reasons why the devs might not want to use Ravenholdt for the rogue class order however both of the objections are not consistent with other announced information and/or can be fixed logically within a purely game setting.
From Paryah (@One_Rogue)
The case for Ravenholdt.

In game, Ravenholdt is already an established Rogue headquarters. It is and has been the site of multiple rogue quests. Notable existing events at the compound are the class quest to obtain  the Survivor’s Bag of Coins and the Fangs of the Father questline and finale. The Ravenholdt compound includes everything that a rogue organization would need: gardens for growing poisons, a training area, the manor with fences, vendors, quest givers, and plenty of room for iconic class memorabilia. We even have our own manor cat, Salome. 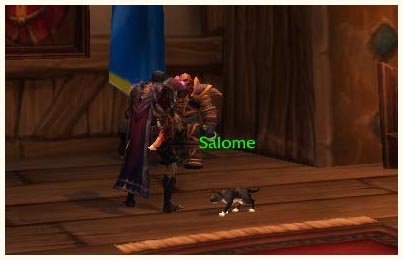 The secret compound in an out of the way place far from civilization is a trope of clandestine groups in modern storytelling. From Afterlife in Marvel’s Agents of S.H.I.E.L.D. to Scaramanga’s island in The Man with the Golden Gun, to Ra’s al Ghul’s fortress in Arrow, and many more, the retreat is a place where members of these groups go to train, to scheme, to de-stress/heal up between capers, and to keep their trophies and spoils. Ravenholdt Manor is the rogue’s version of this in World of Warcraft. A place like the sewers of Dalaran may be good for a quick meeting, a visit to a fence,  a drop/pick up, or even a staging area, but it’s way too close to civilization to be the place where the majority of training and planning happens.

There are certainly arguments to be made for putting us in Dalaran. We’ll be close to the action, if there are portals/hearthstones associated with the Class Orders ours would possibly get us to Dalaran for free, we’d be hidden in plain sight. But Dalaran is the City of Mages. They belong here, not us. If we build a base in Dalaran, are we really naive enough to believe that it is not at the sufferance of the mages? We are smarter than that. We are more cunning than that. Gameplay convenience aside, Dalaran is not where we belong.

The Burning Legion invasion threatens all of Azeroth. This upcoming expansion will include events that will affect various areas across the whole of Azeroth. Having Class Order halls spread out around the map and reusing/updating old locations really appeals to me and intensifies the idea that our world, what we know and love, is what is at stake. I hope that Blizzard takes all of this into consideration as they plan this feature for Legion.

Intro and links brought to you by Haileaus.  Pictures were taken by Hail and added by whoever is gonna do that for me Paryah because adding images is frustratingly difficult.